(ATTN: UPDATES with aides' offer to resign from party posts)

SEOUL, Nov. 23 (Yonhap) -- A court on Wednesday began a legal review of the detention of a ranking Democratic Party (DP) official, nicknamed the "right-hand man" of opposition leader Lee Jae-myung, four days after the official was put under pretrial detention on bribery and other charges.

The Seoul Central District Court conducted the review of the detention of Jeong Jin-sang, a vice chief of staff to DP Chairman Lee, and is expected to release the results Thursday afternoon at the latest. 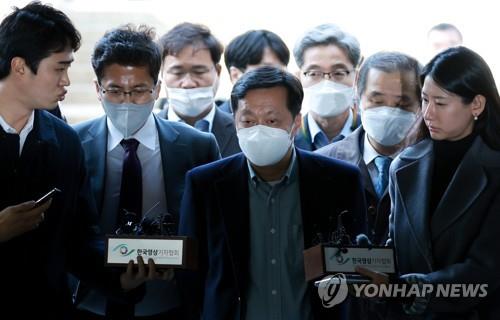 The same court issued an arrest warrant Saturday for Jeong, who is accused of taking about 140 million won (US$104,000) between 2013 and 2020 from real estate developers at the center of a corruption scandal in Seongnam, south of Seoul, in exchange for business favors for the project launched when Lee was its mayor.

Jeong also faces suspicions that he was promised a 24.5 percent stake worth 42.8 billion won in the land development project in the Daejang-dong district of Seongnam, in return for business favors given to the real estate developers.

The court cited the risk of flight and destruction of evidence as reasons for its approval of the arrest warrant.

But Jeong's lawyers requested a judicial review of the legality of Jeong's detention two days later, accusing the prosecution of fabricating charges against him and refuting the court's reasons for his detention.

The lawyers also said it is necessary to reexamine whether the arrest warrant was issued reasonably, noting the same judge issued an arrest warrant on Oct. 22 for Kim Yong, another DP official close to Lee, on charges of receiving 847 million won in illegal political funds from the Seongnam property developers.

Prosecutors, however, argued that Jeong's application for the review of the detention should be dismissed because there has been little change in circumstances since his detention.

Jeong and Kim tendered their resignations on Wednesday, citing difficulties in carrying out their duties amid what the DP claimed was "wrongful political oppression," party spokesperson Rep. An Ho-young said.

The DP accepted Kim's resignation but deferred Jeong's as a court review is under way, according to An.