The Seoul Central District Prosecutors Office has recently secured a court's warrant to trace the accounts of Lee and his family, apparently to look into anything suspicious about the money transactions between the DP chief and the people around him, according to the officials.

Prosecutors appear to be checking whether parts of the money received by two of his closest aides, Jeong Jin-sang and Kim Yong, from real estate developers at the center of a corruption scandal in Seongnam, south of Seoul, flowed to Lee's side, they added. 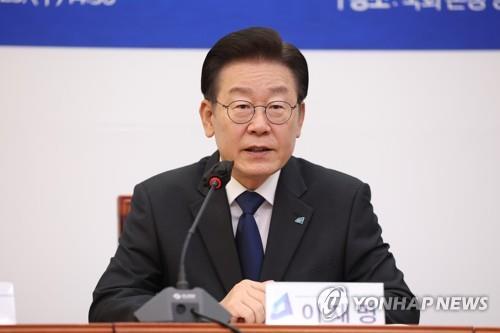 Jeong, a vice chief of staff to the DP chair, and Kim, who resigned this week as deputy head of the DP's Institute for Democracy think tank, have been arrested on charges of receiving about 140 million won (US$104,000) and 847 million won, respectively, from the Seongnam property developers allegedly given business favors when Lee was the city's mayor.

Prosecutors have also begun looking into allegations that cash worth 100 million to 200 million won was kept at Lee's home.

In this regard, they recently questioned a whistleblower who reportedly alleged he saw a Gyeonggi provincial government employee close to Lee coming out of his home in Seongnam with a paper bag of cash in June last year.

The whistleblower drew media attention early last year after disclosing suspected misuse of Gyeonggi government credit cards by Lee's wife, Kim Hye-kyung, and the employee, surnamed Bae, while the DP chief was serving as the governor.

The whistleblower reportedly told prosecutors he heard from Bae the cash worth 100 million to 200 million won was deposited into Lee's bank account.

Prosecutors suspect the cash kept at Lee's home may be part of the money his aides had received from Seongnam developers, noting Kim Yong's alleged bribery occurred around June last year.

Meanwhile, the DP strongly denied the allegations surrounding the cash kept at Lee's home, arguing the money valued at about 270 million won was withdrawn from his own account in 2019 and included condolence money received after his mother's death in March 2020.

The main opposition party went on to say Lee already reported the cash in his asset disclosure in the 2020-21 period and spent the money to pay for his presidential primary expenses last year.