The goal was outlined as President Yoon Suk-yeol presided over a meeting of government and military officials and heads of local defense firms to expand arms exports at Korea Aerospace Industries, South Korea's sole aircraft maker, in Sacheon, 301 kilometers south of Seoul. 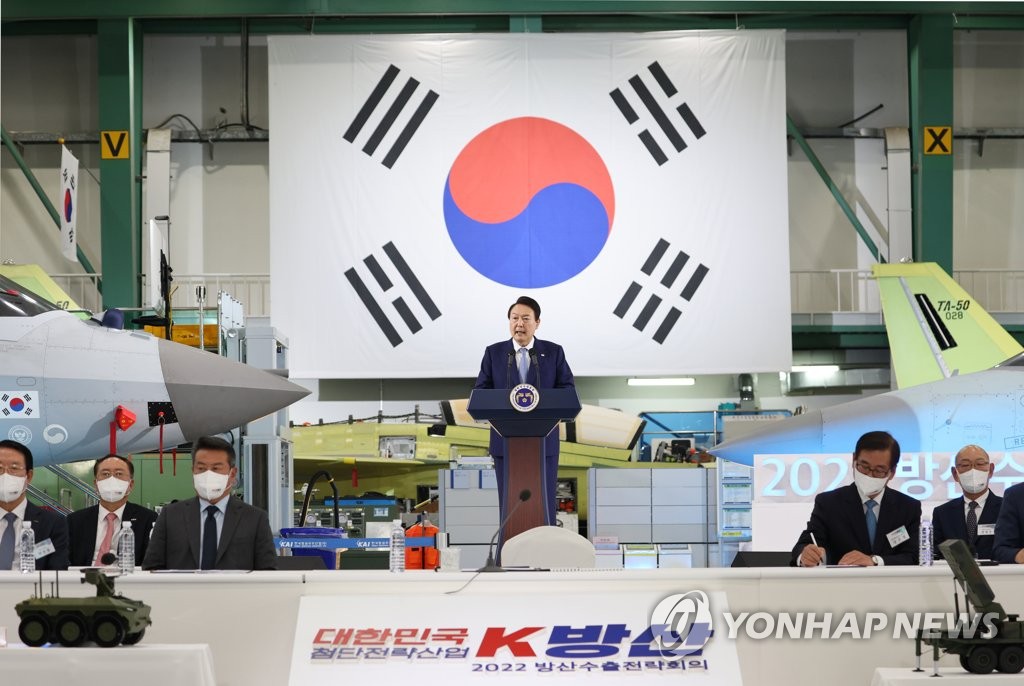 Among the four tasks is to secure future "core" technologies, including a series of "game-changer" ones, such as artificial intelligence, hypersonic technology, synthetic biology, future communications and quantum physics.

Another task is to strengthen government support for the arms industry through a set of measures, including selecting 100 promising mid- and small-sized defense enterprises by 2026 to support them in business counseling, funding, research and development and other areas.

The government also seeks to create a "defense technology innovation fund" worth 120 billion won (US$90 million) to ensure a smooth flow of funds into venture firms.

The government, in addition, plans to expand the proportion of research and development in the defense budget to 10 percent or more by 2027.

The tasks include pushing to develop technologies for 40 core materials and components, including carbon composite materials, and nurturing around 3,300 personnel specializing in mechanics, aviation, materials and other fields.

The government, in particular, plans to announce its strategy in December to secure world-class technologies in the carbon composite material field and achieve a 10 percent share in the world market.

Also among the tasks is to invest 1 trillion won or more by 2027 to push for "innovative" research and development efforts, such as transferring defense technologies to the civilian sector, incorporating civilian technologies into the defense realm and developing technologies used for both military and civilian areas.