SEOUL, Nov. 24 (Yonhap) -- Military cooperation between North Korea and Russia cannot be ruled out, the first deputy chief of Ukraine's parliament said Thursday, amid U.S. allegations the North is providing Russia with artillery shells for use in the war against Ukraine.

Oleksandr Kornienko, first deputy chairman of the Ukraine parliament of Verkhovna Rada, made the remark during an exclusive interview with Yonhap News Agency, saying Iran has been supplying weapons to Russia and the situation could be similar with North Korea.

"Because we know what Russia is like, we cannot rule out the possibility," Kornienko said through an interpreter during the interview held at a hotel upon his arrival in Seoul for meetings with South Korean parliamentary leaders.

"There have been media reports on Russia and North Korea's military and civilian cooperation and we have heard that the North may take part in restoration efforts. Based on this, we assess that military cooperation may take place, though we don't have concrete evidence," he said.

Earlier this month, the White House raised allegations that North Korea is covertly supplying a "significant number of artillery shells" to Russia while trying to obfuscate the real destination of its shipments by funneling them through third countries.

The North has since denied the report, accusing the U.S. of spreading "groundless" rumors against Pyongyang in an attempt to tarnish its image, and saying the country has "never had 'arms dealings' with Russia and that we have no plan to do so in the future."

"We have shot down many Iranian drones and their parts have shown they were made in Iran. But we don't have proof like this in North Korea's case," Kornienko said. 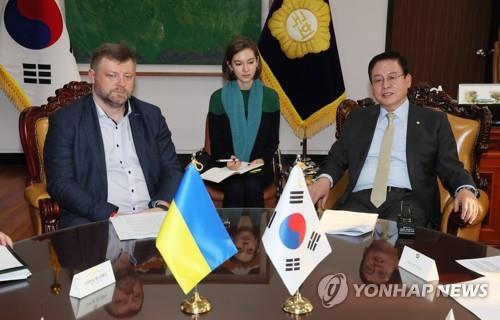 He said that one of the Ukrainian government's biggest goals is to recover the quality of life for residents affected by Russia's attacks and resultant water and power disruptions.

"What we anticipate from South Korea is humanitarian support. South Korea's support is also crucial in rebuilding infrastructure," he said, mentioning how the country can help reconstruct temporary and permanent residential facilities that have been destroyed.

"South Korea's cooperation is needed in pushing for and developing U.N. resolutions. And I believe there is a need for a resolution by the Korean government condemning Russia's actions," he said, stressing the need to bolster a sanctions mechanism against the country.

While voicing concerns over the war that is lasting longer than expected and grave circumstances at home, Kornienko anticipated that Ukraine will recover more of its territory with international support.

"We have recovered 56 percent of the territory that had been invaded by Russia. I believe this trend will continue because the world and South Korea is supporting Ukraine," he said.

"Our goal is not just restoring Ukraine to pre-war stage but building a new country after victory. South Korea is a country that has a lot of experience and we believe it could help Ukraine going forward," he said.