SEOUL, Nov. 25 (Yonhap) -- An oil tanker, with two South Koreans and 17 Indonesian sailors aboard, was hijacked by pirates in international waters off of West Africa earlier this week then released a day later, according to South Korean foreign ministry officials Friday.

They said the sailors on board a 4,000-ton tanker, B Ocean, owned by South Korean shipping company SK Shipping Co. lost contact at around 7 a.m. Thursday (Seoul time) in international waters 200 nautical miles south of Abidjan, Ivory Coast. The two South Koreans were the captain and the ship's engineer.

They resumed contact at around 11:55 a.m. Friday and the safety of the sailors has been confirmed, an official said. The pirates reportedly stole petroleum stored in the tanker and destroyed the ship's internal equipment.

"The captain contacted the company after the pirates got off the ship," the official said on background, adding the sailors confirmed that the ship remained operational after going over the damages of the equipment. The ship plans to return to Abidjan.

In August of last year, four South Koreans who were kidnapped in waters off West Africa were freed after two months of captivity.

In 2020, Seoul sent a Coast Guard official to Ghana to better protect its citizens in the piracy-ridden waters while the authorities have sought legal measures to restrict fishing operations in high-risk waters. 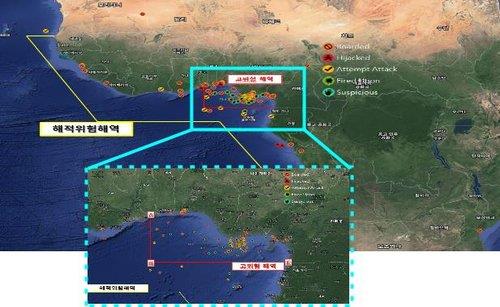